Books
The author’s major work, “A History of Modern and Contemporary Greece, 1750-2015”, will be published in English in 2021 or early 2022, at Yale University Press. The book published in French (title below in French) can be found in major public libraries in France and in Greece. The titles of the twelve books initially published in Greek are here translated in English. Most of the titles are linked to additional information about the contents of the books.

Social Change and Military Intervention, Greece 1880-1909.
Athens: Exantas, 1977 (2 editions and 4 reprints; the author’s PhD thesis, translated and substantially edited from the initial English text which may be still available at the University of Sheffield, UK.)

The Central-Bank Question. Economy and Politics in Nineteenth Century Greece, with an introduction by Constantine Dimaras.
Athens: Cultural Institute of the National Bank of Greece, 1980 (2 reprints)

Lernaion Kratos. State and Power Complex.
Herakleion, Crete University Press, 2019. (A reviewed and expanded edition of the above essay).

Historia tou Hellinikou Kratous, 1750-2015.
A new book to replace the previous “Historia […]” at Crete University Press, 1st edition 2018. The text now covers a considerably larger period, 1750-2015, as shown in the new title. However, 240 pages were moved in Appendixes easily accessible on line (www.cup.gr). The reader will also find there a 106-page database containing 50 Tables of quantitative data, particularly useful to students and researchers. Thus the book is now in one pliable volume of 948 pages. 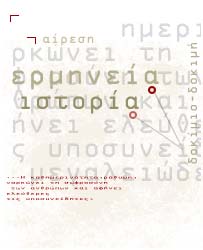